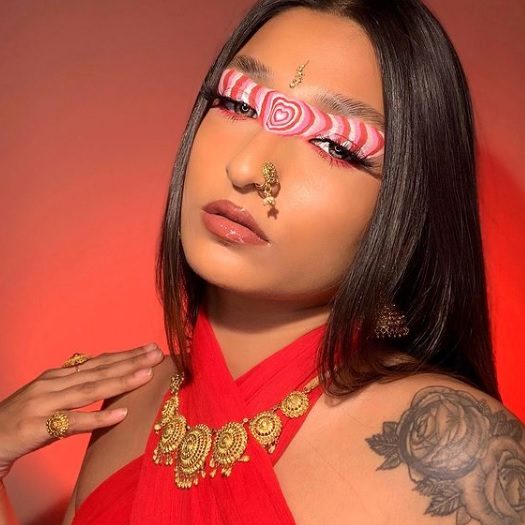 Makeup and fashion have always been a big part of Samhita Sharma’s @makeupbysamba life. So, when the opportunity to become a content creator along the same lines, presented itself, Samhita grabbed it by both hands. One look at Samhita’s Instagram page, and it becomes very clear that she is playing the game by a completely different set of rules — her rules!

The first time Samhita started experimenting with makeup was as a child. And while it was a hobby for her then, she quickly realized that it could very well be one of the biggest passions in her life. When the lockdown happened in 2020 due to Covid-19 pandemic, many turned to social media to fill a void in their lives left by the lack of a social life and going out — and Samhita did the same. She says that she started making videos during the lockdown and when she got a great response for her out of the box looks, there was no turning back for the beauty influencer, who now boasts of having over 15k followers on Instagram.

Samhita is one of the fastest growing influencers and a top beauty blogger in India, and her videos have a uniqueness in them because she experiments with runway looks and dramatic makeup ideas. She comes from a creative background and that has helped her greatly in developing an eye for aesthetics, which has helped her journey so far. She says, “I am a visual designer and before this, I was doing a PR role and I had worked with a few designers. But when Covid-19 hit, I was staying in Mumbai alone and we had to do everything from home. That’s when I saw a makeup challenge which was to make a patterned make up look and decided to participate in the challenge. That eventually led to me creating one make up look every day. At that time, I just had one eye shadow palette and one brush and I created approximately 50 looks from that palette. But I got a great response for the first few posts that I made from the audience, friends and family. After that, my father suggested that I quit my job and go back home to do content creation full time.”

Stand out from the clutter

Samhita was always clear about making videos in a way that would stand out from the general clutter that’s available out there. She says, “I generally never related with Indian creators and their content. Since I am a designer, I used to follow a lot of interior designers and then I started following a lot of editorial makeup content. Once I got into runway makeup, I always thought that doing intricate makeup and getting Indian culture in runway makeup is something that I want to do. I didn’t want to do the same bridal looks. Out of the box was definitely the point,” adds the creator.

However, the journey was not a bed of roses for the beauty/makeup influencer. Since her content is very different, she says she has to deal with a lot of negativity. “People ask me where would I wear such makeup and they just think what I do is outrageous. But creating these looks just calms me. And now, the younger generation has started understanding editorial content or editorial makeup that we do. However, I know parents and grandparents still don’t understand what kind of makeup this is and I am never going to be able to make them understand,” she says with a laugh, adding that it is very difficult for her to grow on social media because the content she creates is very different.

No hate, only positivity

Samhita remains unfazed by the hate that comes her way on Instagram though. She says, “In the beginning, I used to get affected because I never really had a public page but two of my videos went viral and I got so much hate on those videos. I had reached a point where I wanted to stop making content. But after that, Chtrbox contacted me, Instagram contacted me and a lot of brands come in touch with me. So, I told myself that I was not going to let that hate hinder my growth and I decided not to quit,” says the influencer, who strongly believes that this field of content is the future and is going to see a steady growth in the near future.

As someone who has quit her full-time job to pursue content creation, Samhita believes that the creator economy is only going to continue its immense growth now. “Since the pandemic hit us, we didn’t know what to do and being a creator became a real thing. A lot of people started doing this on the side and we are feeling good by doing things that we really love and we are also earning money through it. The possibilities are endless on social media and the money is there. If you stick to it, you know you are going to reap the benefits. Becoming a full time creator is the future because brands know we can really connect to the audience. If they are finding it difficult to grow their product, they know we are there to push their products because we know our audience. So, the advertising on TV and YouTube is going to go down. The creator economy is a billion dollar prospect and we should all be part of it now,” she signs off.

Samhita is managed by Chtrbox Represent which also manages 50+ other influencers from across genres like food, beauty, fitness, travel and everything social media. Chtrbox Represent is the talent management division of Chtrbox, which is India’s top influencer marketing company.