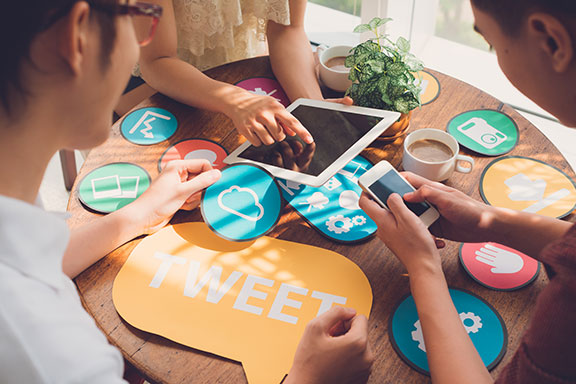 While the trend picked up in 2014 with some amazingly designed influencer marketing campaigns, 2015 has already seen a bevy of interesting influencer-driven digital campaigns. We bring you 10 such campaigns that have leveraged influencers, to bring alive their brand message, to create digital buzz on social media or to help the brand reach out to a targeted audience.

Four popular Twitter influencers were roped in for the new Tata Bolt a day before its launch. The idea was to generate buzz amongst its TG of social savvy millennials. Rather than have these influencers tweet and make noise about the launch, Bolt hosted a unique digital reality show #GetSetBolt that also involved participation from their respective community. The four of them were enclosed in glass cubicles. To get out, they needed to get the symbolic Bolt key by generating the maximum buzz amongst their followers.

For the Gusto, Mahindra Two Wheelers’ first automatic scooter developed entirely in-house, the brand launched an innovative influencer-driven campaign involving food lovers in a city. It arranged a food ride called the #GoGustoRides led by influential food bloggers that saw a group of food enthusiasts explore their city’s most famous food joints riding their Gusto. While the first edition was in Mumbai, the second one was held in Bengaluru making the Gusto a scooter for fulfilling your ‘gusto’ in life. Read more on the Mahindra Gusto #GoGustoRides campaign.

Mountain Dew, PepsiCo’s citrus flavoured carbonated drink recently extended its brand ideology to making a name by taking a risk (Naam bante hain risk se). Although the TVC starred brand ambassador Hrithik Roshan, the brand brought on board real achievers who have risked their lives to make a name in history. Padmashri Arunima Sinha, the first woman amputee to climb Mount Everest, all with the help of a prosthetic limb and a rod in the other leg; Padmashri Shital Mahajan, the skydiver with over eight world records including youngest woman to jump over North and South poles, and many others comprise the video driven campaign.

Amazon India has been working hard at instilling e-reading habits in the country, ever since it launched the Kindle Paperwhite in India last year. As part of its #CrazyForReading promotional campaign this year, Amazon roped in two of India’s bestselling authors, Ashwin Sanghi and Amish Tripathi to endorse the e-reader. Two films captured the authors’ reading habits on the e-reader, taking the viewer through their journey of reading books to now reading on their Kindle, while the two share the helpful features of the device.

When coconut hair oil brand Parachute Advansed rolled out its digitally-driven campaign to spread the ancient Indian art of oiling, it roped in beauty bloggers at the launch, where they were trained on the various techniques of oil massages. More than 30 influential bloggers in the beauty, health and makeup domain were invited to the launch event that included a live demonstration by the massage expert Moses Chund. These bloggers documented their experiences to further amplify digital reach of the do-it-yourself videos and oiling techniques with their relevant community.

Leveraging cricket season this IPL8, taxi service provider, TaxiForSure had launched its Twitter videos-driven digital campaign #MadnessForCricket, with the help of a cricket influencer. Fans were invited to share their #MadnessForCricket on their Facebook or Twitter timelines, and two were chosen to challenge cricket junkie, quiz freak and presenter, Gautam Bhimani on a one-on-one quiz. They needed to ask him anything in cricket and he would answer; if they managed to stump him, the winner was gratified with TaxiForSure voucher. The challenges were captured through Twitter videos and led to real time engagement for the brand.

Reebok India, one of India’s leading fitness brand wanted to strengthen its brand mantra #FitnessIsForEveryone and also build an online community of fitness trainers and enthusiasts. It teamed up with Chetan Bhagat, a popular and highly influential writer, for its campaign ‘Reeboot 100’ – a 100-day transformation program with a diet and fitness plan designed for Bhagat. Designed by Reebok master trainer Vinata Shetty, the Reeboot 100 fitness challenge included a range of fitness activities such as cardio training, functional movement training including running, crossfit and yoga. While Bhagat followed his plan, he shared about his progress with his large follower base on social networks, while building brand awareness.

For the launch of its compact sedan Figo Aspire, Ford had kickstarted a pre-launch campaign called “What Drives You?” The objective was to discover the aspirations driving modern India, much like the new sedan that reflects the needs of the young consumer. And to discover what young India aspires for, Ford roped in Farhan Akhtar as an anchor to bring forth passionate stories of real life achievers. Phanindra Sama, Co-founder & CEO, RedBus.in, Rajat Tuli and Rahul Anand, Co-founders, Happilyunmarried.com, Indrani Medhi, Researcher, Microsoft Research India and Lakshmi Pratury, Curator, INK, shared their story in a drive-by interview with Farhan while he drove a Figo Aspire.

As part of its global marketing campaign #MakeItHappen to build awareness for its Lumia branded smartphones with Microsoft Phone 8.1, Microsoft Devices roped in influencers like actress Kangana Ranaut, badminton champ Saina Nehwal and MasterChef India winner, Pankaj Bhadouria for its India campaign. The idea was to showcase how ordinary people can achieve their dreams. Three films featuring each of the influencers had them communicate with people through Skype and the Lumia phones to share what hardships they faced personally before ‘making it happen’ in their lives.

Fair & Lovely, the fairness cream brand that most social media comedians love to hate for its regressive advertising that focused solely towards associating ‘fairness’ with ‘success’, took a complete U-turn in its latest campaign. Its campaign this year did not focus on fairness as a parameter of success. The brand teamed up with beauty bloggers who did not promote its skin benefits. Instead, beauty and fashion vloggers created videos sharing tips on communication, hair, dressing and also talked about the role of confidence at work. Fair & Lovely’s beauty brigade of bloggers are helping the brand shift its communication from superficial beauty to inner beauty.

This article was originally posted on lighthouseinsights.in