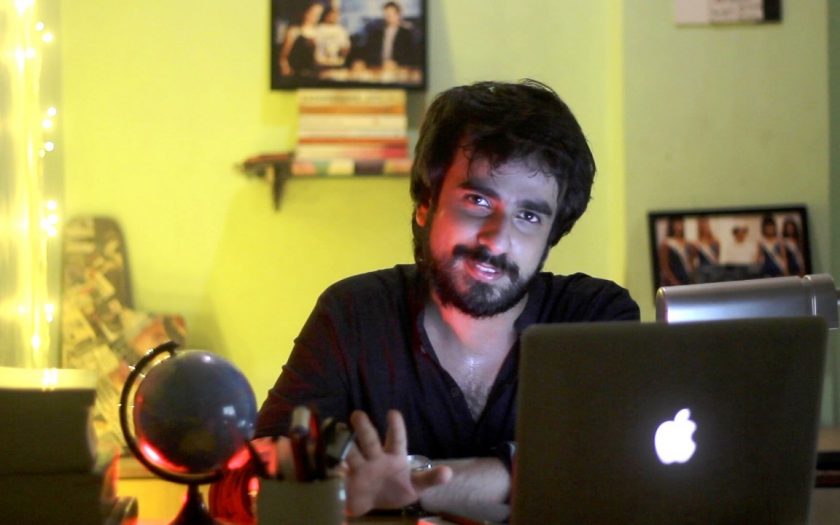 This week we had a chance to talk to Vaibhav Munjal, the creator of Chalchitra Talks. Today the channel stands strong with a whopping 303k followers on TikTok and 17k subscribers on Youtube.

Recently, they’ve also launched Kahani Quickies where they brought filmmakers Vikramaditya Motwane and Vasan Bala to their channel for a fun game. With Kahani Quickies they also have fun storytelling and filmmaking related exercises and games with known personalities.

Let’s understand how it all started, and how an indie movie recommendation channel built an audience on TikTok and more!

I’ve been a short filmmaker for 7 years now, I started my filmmaking journey in 2014 when I was doing Civil Engineering. During that time, every time my semester would get over I’d come to Mumbai do an internship with TVF. That was when I understood that there was a language gap which lead to several embarrassing moments.

After the internship got over I realised that if I wanted to build a life in Mumbai I will need to speak in their language. So in 2014-2015, I started watching one movie every day. First, it started because of fear but soon it became a habit and I started having fun watching new movies every day.

During college, I even started making my own short films. After graduation, I continued to make films and do commercial work.

The Chalchitra journey started when my elder brother recommended that I do something every week to build my self-discipline. So I started putting out a list of all the films I would watch every month. I took this idea from filmmaker Danny Sangra.

Slowly, my audience kept building up. So I went ahead and made one episode of it which was supposed to be an experiment but it turned out good enough for me to upload it. Since then, I’ve been consistently uploading videos.

2. You currently have 305 thousand followers on Tiktok even though you started it just last year, how did it start?

At a social event, I was introduced to two TikTok India representatives. Talking to them made me realise the potential of TikTok. They had seen my content on Youtube and absolutely loved it. They were the ones to know the potential of my content on their platform. Later that night, I ended up making a quick 30sec video on a Netflix film that I had watched and uploaded it on the platform. When I woke up the next day the video had over 8 thousand views. After that there was I was consistently uploaded content on TikTok and the views soon started reaching millions.

3. That’s amazing, what do you believe brought this huge audience to you on TikTok?

I think it was the right use of hashtags and keywords that got me so much visibility. Also, I make sure I recommend movies that are available on any OTT platform. This makes it easily accessible. I also believe that TikTok has an audience which is hungry to consume well-created content but usually cannot reach it. In their universe, Chalchitra talks is what exists to recommend great movies to them.

4. What do you think has lead to your growth on these platforms?

To begin with, it was my passion for creating films and content. Therefore I’ve made sure that my content is always decently set-up and always has high-quality production. Apart from that the most important thing would be consistency, I have never missed a week to upload content in this much time. I’ve managed to create niches on every platform related to my audience there. I also adapt my content according to the platform that I upload it on.

5. What has your experience with your TikTok audience been like?

This one time when ‘boom bang’ dropped truth bombs…

It’s been amazing, to my surprise — people are super nice there. They keep showering me with compliments on my content and there’s a lot of positivity on the platform. Although that doesn’t mean they don’t call me out when they don’t like a film that I recommend. However, they do it with dignity and respect so I always appreciate that.

6. What’s your biggest challenge as an influencer?

As an influencer, I understand the power we hold therefore, I have made Chalchitra Talks a recommendation channel rather than a film critique channel. Having said that, I don’t believe film criticism is a lesser art form. I simply believe there is a lot of good art around us and therefore, there is no point of wasting my energy on bad art. This will be a challenge when we go ahead for promotions however, we are working on figuring that out.

7. Which influencers do you look up to? Who do you think is doing groundbreaking work?

My favourite has to be Hoezaay_, he has a different style of comedy which I truly enjoy. I would recommend you to watch his interview with Amitabh Bachan. It is truly hilarious. I also enjoy Dhruv Segal’s content even though I might be a little biased towards him as he’s my friend. Apart from that, I look up to Regha Jha, her social media detox was truly inspiring.

8. What are your favourite tools? (For editing, shooting, etc)

As a filmmaker, I swear by iPhone. People talk about its camera but even Google Pixel has a good camera what people don’t talk about is an iPhone’s audio quality. I’ve never had to invest in mics for Chalchitra talks since it has such great audio quality.

9. What’s your dream, or ultimate goal?  Where is this path heading for you?

A friend from TVF recently advised me to keep creating content until I stop enjoying it. I think that has stuck with me because I don’t want to fall prey to the cycle of watching numbers and ending up making content only for numbers. So I think my goal would be to keep my love for movies alive and keep spreading it.

Thanks so much Vaibhav for these insights! Go ahead and check out Chalchitra Talks for some brilliant movies, books or poetry to consume!

Loved this one? You can even check out our interview with Sonal Devraj or Palak Sindhwani.